In the spring 2017, a few months after I settled in Montreal to conduct fieldwork among diasporic youth form the Middle East, I learned that, in 2009, the city had commissioned a monument to honor its Lebanese heritage. Inaugurated in 2010, the art piece was intended to commemorate the 125th anniversary of the arrival of Montreal’s first “Lebanese immigrant”. Immediately, I decided to pay a visit to the Marcelin-Wilson park where the monument was erected.

When arriving from the main avenue, the monument was still not visible contrary to a memorial for the Armenian genocide. I wandered deeper into the park and started to discern the dark 3-meter-high sculpture. As I came closer, I caught sight of a pyramid-shape monument, crowned with a Cedar tree, the national emblem of Lebanon. An engravement of the Phoenician alphabet stretched vertically from the bottom of the Cedar. On one side of the pyramid, a rank of three oars obviously evoked the Phoenician vessels. On the other, a print of an old Phoenician statue completed the monument. There was no inscription to explain the purpose of the construction. I took many pictures from the different sides and went home to learn more about the monument. 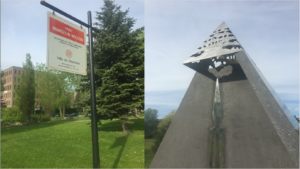 Finding information on the monument was easy as the city of Montreal displays the list of all its public art monument online. I learned that the sculpture was entitled Daleth, after a letter Phoenician alphabet that also means “Door”. It was realized by the Montreal-born artist Gilles Mihalcean. Today, the official web page still reads:

Daleth presents three tableaux. On one side, a road in perspective leads toward the top of a triangular mountain, at the summit of which is a cedar tree, the emblem of Lebanon. This road is the symbol of peddling, the trade practised by the first Lebanese in Montréal and a gateway to the encounter of diverse cultures that is immigration. On the second face, three oars emerging from the granite structure refer to the history of the Phoenicians, ancestors of the Lebanese, who used boats to conduct their trade in cedar wood. On the third face are the 22 graphemes of the Phoenician alphabet, one of the earliest writing systems.[1]

In fact, despite the intension of the artist, Daleth symbolizes a conflict of memory. The exclusive allusions to so-called “Lebanese national symbols” ignores the complex history of migration from the Levantine region. Indeed, Lebanon as a country did not exist when the first “Lebanese” immigrants landed in Montreal during the 1880s. At that time, the territory of modern-day Lebanon was part of the Ottoman Empire and divided between three administrative entities: the wilaya of Beirut, the wilaya of Damascus and the semi-autonomous Mutasarrifate (province) of Mount Lebanon. For the Canadian authorities, these people were considered as Ottoman citizens, but also designated as “Arabs” or “Syrians”, sometimes “Levantines”[2]. More generally, their entries were soon subjected to the regulations and restrictions imposed on “Asians”.

To identify, the immigrants generally used the word “Syrians”. They established themselves in number around the Notre-Dame street, which became known as “La petite Syrie” [Little Syria] at the turn of the 20th century[3]. It was only in 1920, after the creation of the state of Lebanon under a French mandate that the former Ottoman citizens from greater Syria living in Canada were asked to opt for either the Lebanese or the Syrian citizenship. In case they failed to make a choice in due time, they would automatically become Turkish nationals. Afterwards, the denomination “Lebanese” imposed itself gradually in the second half of the 20th century following new waves of immigration from Lebanon.

This complex history has been materialized in particular in the names chosen by the immigrants for their communal associations[4]. One the first secular organizations they founded was the “Syrian National Society”, established in 1910. In the 1950s, it became the “Syrian Canadian Association”. Its name changed to the “Lebanese-Syrian Canadian Association” in the 1970s, under the influence of growing Lebanese immigration. International politics also played a role in this evolution, in particular the intensification of the Israeli-Arab conflict. Finally, the association was renamed “Lebanese Canadian Heritage Association” in  2006 following the disengagement of the Syrian armed forces from Lebanon, where they were stationed since the end of the Lebanese civil wars (1975-1990). These transformations denote a re-reading of the migration memory in the light of an exclusive Lebanese identity narrative. A trend that the Daleth monument equally illustrates.

Diasporas and the politics of memory

The limited vision of the Levantine heritage in Montreal expressed by Daleth also resonates with political conflicts that have structured the ideological debates since the creation of Lebanon in 1920. The foundation of the state rested on a political pact sealed between France and the elites of the Christian Maronite community. It was also imposed by force after the French military victory over the self-proclaimed Arab ruler of Syria, Faysal al-Hashemi. In this context, the reference to the Phoenician origins of Lebanon was an attempt to legitimize the invention of a state separated from the rest of Syria. Cultivated among the Maronite elites since the end of the 19th century the myth of the Phoenician roots was put forward as the basis of a Lebanese national identity distinguished from its Arab surroundings. Although historically fallacious[5], this narrative could be compared to other mythologies that are at the core of almost every national imaginary. However, in the case of Lebanon, this myth did not help to forge unity but instead intended to justify the political, cultural, and economic domination of the Maronite elites over the rest of the population, in particular its Muslim components. It became the heart of a symbolic struggle throughout the history of Lebanon between two visions of the country: on one side, a view defining Lebanon as integrated into the Arab world, with which it shared a common historical and cultural heritage; on the other side, an exclusive conception of a Lebanese identity strictly embedded into a Maronite political and religious ideology. This tension, often summarized by the over-simplifying opposition between Arabist and Lebanonist movements, has played a central role in the identity conflicts that precipitated the Lebanese civil wars between 1975 and 1990. 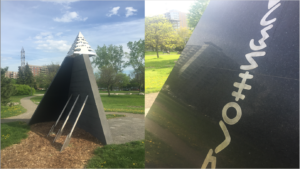 Therefore, the problem with Daleth is not only the reference to an anachronistic national myth that silences the complexity of the origins of the Levantine diasporas in Montreal. It is also that the symbols put forward to express the Lebanese presence in the city are closely associated with a powerful ideological struggle that has shaped the political landscape of Lebanon for decades. Daleth hence promotes a conflicting vision of history, exclusive of all Arab and Syrian experiences. It revisits the rich past of the Levantine communities in Montreal in the light of a nationalistic as well as chauvinistic trope. It essentializes 125 years of immigration under a single label, while in fact populations from the Levant have never constituted one single community mostly because they were constituted through a series of successive inflows that did not have much in common.

Drawing on family and life trajectories to embrace complexity

Contrary to the essentializing vision of Daleth, other memory works in Montreal have attempted to embrace the plurality of memories coexisting among the diasporic communities from the former Levant. It was in particular the case of the exhibition Min Zamaan [So long ago] organized at the Centre d’Histoire de Montréal[6] by Brian Aboud, a sociologist who specializes in ethnicity, migration, and racism studies, and himself originating from a Levantine family established in Canada in the 1900s. The exhibition intended to represent the kaleidoscopic memory existing in fragments among the diasporas. Drawing on a myriad of family stories and daily life objects, it brought to light a past that had until then remained largely invisible. Reconstructing narratives from scratches,  “Min Zamaan” offered an alternative to the template of the exclusively Phoenicianist Lebanese identity suggested by Daleth. It provided a framework in which people could incorporate their family or personal memories in all their diversity[7].

For me as a member of the DIASCON project, the lesson from Daleth is obvious. Studying diasporas from the standpoint of national categories bears the risk of shaping essentialist visions. Instead, I draw on family and personal trajectories as a way to incorporate the complexity of memories coexisting in all human communities. The stories shared with me during my fieldwork depict these complex itineraries that challenge both the discourses of fixed origins and the dominant vision of migration as a linear, unidirectional movement from the global south to the north. It is only by embracing complexity that it becomes possible to understand diasporic experiences in their varied forms.

All photos by the author

[5] See, in particular the work of the great Lebanese historian Kamal Salibi. K. Salibi (1989) A House of Many Mansions: The History of Lebanon Reconsidered (University of California Press). More recently, the work of the British historian Josephine Crawley Quinn also claims that the “Phoenicians” as represented in particular in the Lebanese national myth never existed. See J. C. Quinn (2018) In Search of the Phoenicians (Princeton University Press).