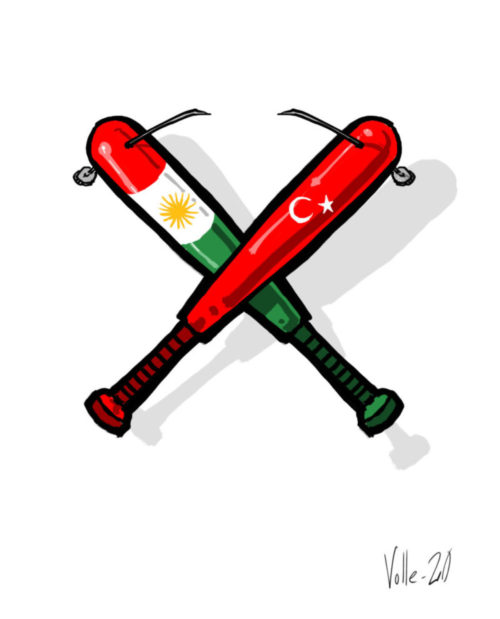 In Denmark, few studies are concerned with the Turkish and Kurdish diaspora communities despite the fact that they constitute some of the largest ethnic minority groups in the country. As especially Kurdish mobilization has increased since the outbreak of the war in Syria and with the increasing role of Turkey in the conflict, understanding the complex dynamics both within and among Turkish and Kurdish diasporas is of great interest.

On May 20, 2020 a Kurdish association in Denmark organized a protest against Erdogan’s recent arrest of elected HDP mayors, at Nytorv in central Copenhagen. The protest was interrupted by a group of people yelling derogatory words and showing signs of ‘the grey wolves’ a Turkish far-right extremist group. It ended in physical violence when a few from the group collided with the demonstrators, causing one of the participants to be ushered to the hospital with a headwound. Last fall, the notion of a “culture of snitching” in Turkish communities caught the attention of the national media, when members of the Kurdish communities in Denmark had allegedly been reported to the Turkish government, accused of supporting the PKK. In 2018, Kurdish men threw firebombs at the Turkish embassy in Copenhagen and during a Kurdish protest later that same year, members of the Kurdish communities were attacked by Turkish men with bats and knives. Although instances of physical violence are rare, the above serves as examples of how the relationships between Turkish and Kurdish communities in Denmark seem to have intensified in recent years. The understanding of these communities and the nature of their (at times conflictual) relationships, however, is all too often simplified and securitized in media coverage as well as overlooked in academic research. Relatively little has been written on the Turkish and Kurdish diasporas in the Danish context, despite the fact that they are among the largest ethnic minority groups in the country. A little over 60.000 of foreigners and descendants in Denmark have Turkey registered as their country of origin (Danmarks Statistik 2020). L’Institut Kurde de Paris (2016) estimates that between 25.000 and 30.000 Kurdish migrants live in Denmark, making it one of the largest ethnic minority groups in the country along with Turks.

In her study on diasporas and conflict transportation in Sweden, Baser notes how the Turkish-Kurdish conflict serves as an interesting case as mobilization in diasporas has been significant, and the conflict takes distinct local, regional, and transnational forms (Baser 2017, p. 675). However, few studies explore to what extent Kurdish and Turkish diasporas transnationalise conflicts in their home country/ies in Denmark (see Schøtt 2019; Østergaard-Nielsen 2001) and in this context no research has been concerned specifically with the inter-diaspora relationships between Kurds and Turks in Denmark.

Since the outbreak of the war in Syria, mobilization of especially the Kurdish diasporas has increased in Europe, including Denmark (Schøtt 2019, p. 14). As has been argued by Féron and Lefort, little research on conflict and diasporas has been dedicated to investigating how conflict might affect and shape diasporas (2019, p. 35). In her research on the mobilization of Kurdish diasporas in Denmark, Schøtt (2019) shows how the war in Syria has had a profound impact on the nature, intensity, and content of Kurdish mobilization. Among other things, she highlights how the participation of Denmark in the war in Syria, as well as a mobilized community of Kurdish diasporas create an environment where both the host-state as well as the diasporic communities are involved in a conflict opposing the same actor (Schøtt 2019, p. 29). Additionally, the increasing involvement of Turkey in Syria brings up the Turkish-Kurdish conflict in diaspora-mobilization for the war in Syria as well (p. 30). As such, the war adds to the complex configurations of diasporic relations. While Østergaard-Nielsen does discuss ‘conflict import’ in her study on transnational linkages in Turkish and Kurdish organization in Denmark (2001), she does not explore the content and structure of the conflictual relationships between the communities. She notes, however, that at the time of writing Turkish political mobilization seemed relatively small, in stark contrast to, for instance, Germany. Conversely, Baser shows how Turkish political mobilization emerged as a response to Kurdish mobilization in Sweden (Baser 2014), making the case of Denmark interesting for comparative purposes as well. Indeed, Baser, Emanuelsson and Toivanen call for research on little known diasporas for exactly this reason (2015, p. 143).

When it comes to the mobilization of Turkish communities in Denmark, the most recent research dates back to 2010. Bak Jørgensen (2010) explores how the structural limits and opportunities to participation and mobilization set by the host country, affect organization in Turkish (including Kurdish) communities in Denmark. Additionally, little research exists on the relationships among Turkish diaspora groups themselves. Since the coup attempt in Turkey in 2016, it appears that divisions between those supporting Erdogan and those with connection to the Gülen-movement have solidified, according to some members of the Turkish diasporas (Hansen and Nielsen 2018). Danish-Kurdish politician Yildiz Akdogan argues for ‘an extreme polarization’ in Turkish communities since the coup in 2016 (Interview in Maach 2018). Members of the Kurdish and Turkish communities have expressed concern for a deteriorating relationship between Kurds and Turks in Denmark. In an interview from October last year, a number of Danish Kurds stated that the level of trust between Turks and Kurds has worsened since the Turkish invasion in Syria (Barrington Rosendahl 2019), and others state how online forums have intensified their language and violent content circulates more frequently (Tuxen 2019).

While the studies mentioned above do discuss the political mobilization of Kurdish and Turkish diasporas in Denmark respectively, the dynamics at play in the contentious intersections of these communities remain to be investigated. The relevance of researching this is only increased by the lack of nuanced coverage in media and an assumption that transported conflicts among diaspora communities are exact copies of those in the home-countries (Baser 2016, p. 23). It ignores their inherent complexity and arguably fails to encompass the entirety of dynamics operating within and between these communities.