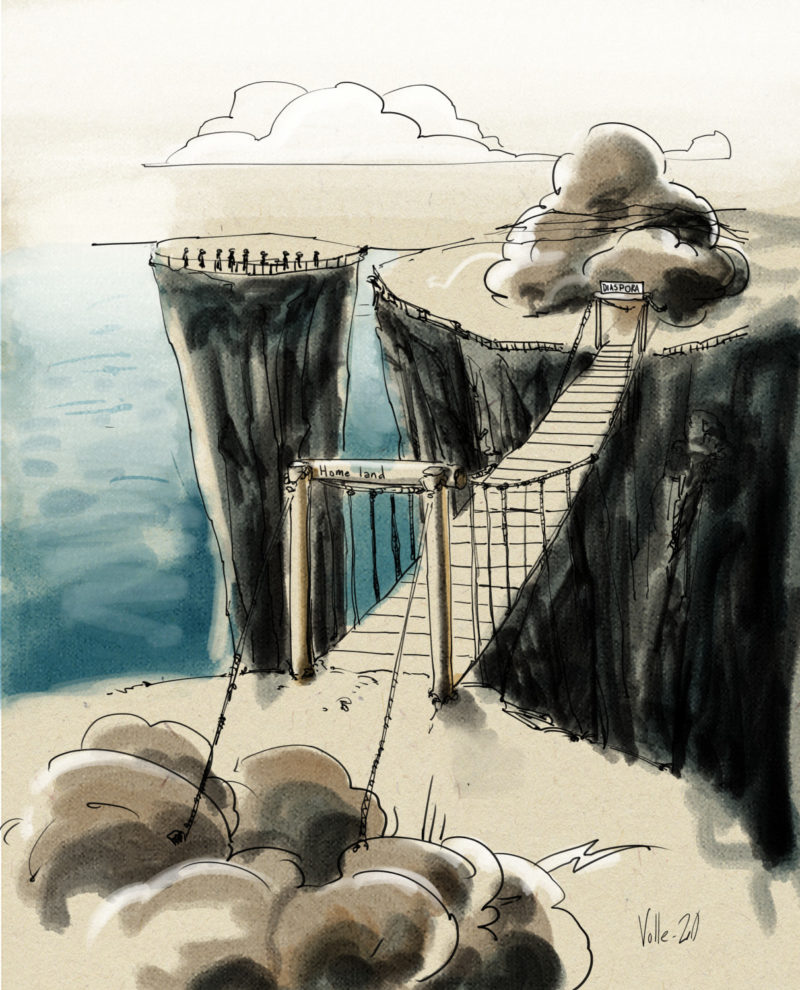 I recently analysed the processes of identification and mobilisation of Sri Lankan diasporas in Italy. It has proved of great interest, given the lack of comprehensive academic work on their political engagement in home and host countries beyond the peace vs war maker dichotomisation and the LTTE’s politics. My objective was to explore how Sri Lankans in Italy perceive themselves in relation to both their countries of origin and of settlement, and how their social and political participation is configured. Particularly, the aim was to investigate whether the homeland inequalities and lines of tension have been transported to the hostland, or whether they have taken different configurations under the influence of new asymmetries of power.

Italy represents an especially interesting case in relation to Sri Lankan diasporas as, conversely to traditional patterns of migratory segregation, it hosts both Sinhalese and Tamil communities. These connections were built on a history of migration and education inspired by the Catholic Church, whose ecumenical policies allowed foreign priests to take educational trips to Italian cities (Benadusi 2015; Brown 2011; Pathirage, Collyer 2011; Interview E). Hence, when Sri Lankan priests who travelled to Italy in the late 1970s met Italian families interested in hiring domestic workers, they helped to establish transnational employment networks between the two countries (Brown 2014; Ferrario 2019; Pathirage, Collyer 2011). While first migratory generations were induced to leave Sri Lanka because of their socioeconomic hardship in the homeland and the desire to uplift their status, following flows mainly comprised both Sinhalese and Tamils forced to flee by violence escalation and insecurity during the civil war (Benadusi 2015; Brown 2012, 2014; Dissanayake, Senadhi 2018; Henayaka-Lochbihler, Lambusta 2004). Therefore, the situation in Italy allows to overcome the dichotomisation usually associated with the ethnic conflict in Sri Lanka and to appreciate the political activism of Sinhalese and Tamils in Italy: in fact, their complex and nuanced understanding of Sri Lankan conflictual dynamics significantly influences their forms of mobilisation in Italy.

In the hostland, Sri Lankan diasporans belonging to the first generation often hold a more nationalist and conservative view as compared to their compatriots in the homeland (Interview A), showing a form of long distance nationalism (Baser 2014, 2017; Demmers 2002; Féron 2013; Féron, Lefort 2019). This is because they have remained rooted in crystallised conceptions of the homeland and its contentious politics (Interview A): according to these static imaginaries, Tamils usually describe the Sri Lankan government as a dictatorship that perpetrated a genocide against them, while Sinhalese often consider Tamils as those who have supported the civil war and terrorism in the homeland (Interview F). The political activism of Sri Lankan diasporas has also entailed the transportation of homeland conflictual dynamics to the hostland, even though this process has been highly context-dependent. In northern and central Italy, conflict transportation seems almost absent, as both groups coexist peacefully and their relationships are characterised by practices of mutual sharing. This process might be the result of the interaction between the pluralistic and welcoming societies of these regions and, perhaps, the more economically oriented diaspora sections settled there. Conversely, in southern Italy the homeland conflict has been transported at the social and discursive levels, taking the form of mutual avoidance, spatial segregation and inter-group distrust. In this case, the more conservative and traditionalist attitudes that sometimes characterise southern regions might have nurtured the already existing cleavages, making diasporic communities reinforce their crystallised views of homeland dynamics (Interviews B and A).

Moreover, in the Italian context the transported conflict has taken different configurations as compared to Sri Lanka: discriminatory practices and violent behaviours have disappeared, while new issues and repertoires of action have emerged (what we can call conflict autonomisation). In fact, both Tamil and Sinhalese diasporans are becoming engaged in Italian politics as well, focusing their activism on the achievement of a better socioeconomic (racism and discrimination) and political (citizenship) integration into the hostland (Interviews D, B, A and C). Furthermore, the political activism of Tamil second generations has taken new forms and issues, as they actively lobby Italian institutions for the recognition of their peculiar identity and of the genocide -«a second silent Shoah»- perpetrated against their people in Sri Lanka (Interviews B and C). To mobilise in different contexts of settlement, they have opted for more effective repertoires of action rooted in the hostland: in contrast to the militant nationalism and public protests of first generations, young diasporans have begun to pool their competencies together in order to find a political solution to Sri Lankan contentious dynamics (Hess, Korf 2014; Rasaratnam 2011; Interview B).

Both Sinhalese and Tamils in Italy display a significant open-mindedness in relation to the civil war, as they blame the homeland government for capitalising on ethnic differences and express the wish for a future of peaceful coexistence, where all ethnicities would be equally granted rights and citizenship (Coccaro 2009; Interviews D and G). Although the legacy of the conflict is still burdensome and continues to be present in the imaginary of diasporans, the sense of estrangement and the need to overcome common difficulties in the hostland may have promoted new inter-ethnic alliances, in the absence of new lines of tension based on the situation in Italy. In this context, diasporic activism has developed on two political fronts -Sri Lanka and Italy- and young generations have begun to look at their homeland as a land of opportunities (Interview A). Perhaps, with their new competences and different attitudes they may pave the way for a bottom-up change in inter-ethnic relations and power structures, although political parties and identity entrepreneurs are powerful actors that cannot be overlooked when analysing the future of Sri Lankan society.

Baser, Bahar. 2014. “The awakening of a latent diaspora: the political mobilisation of first and second generation Turkish migrants in Sweden”. Ethnopolitics: Formerly Global Review of Ethnopolitics, 13(4): 355-376.

Baser, Bahar. 2017. “Intricacies of engaging diasporas in conflict resolution and transitional justice: the Kurdish diaspora and the peace process in Turkey”. Civil wars, 19(4): 470-494.

Demmers, Jolle. 2002. “Diaspora and conflict: locality, long-distance nationalism and delocalisation of conflict dynamics”. Javnost – The Public: Journal of the European Institute for Communication and Culture, 9(1): 85-96.