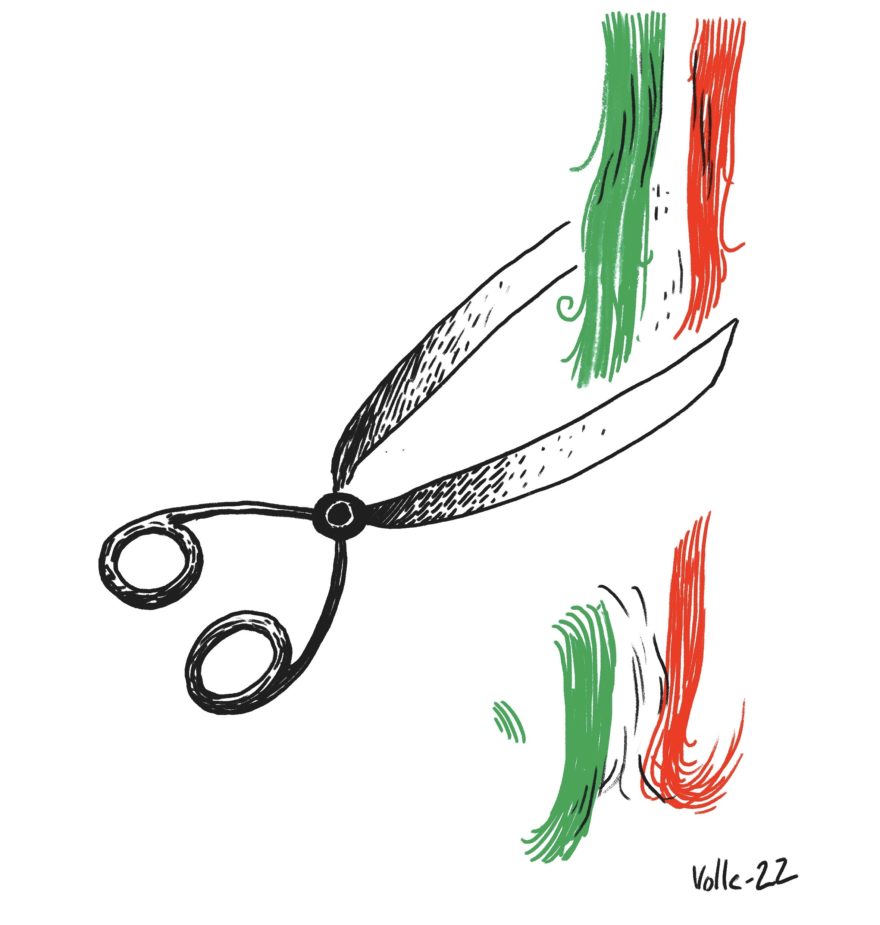 The death of 22-year-old Mahsa (Zhina) Amini sparked mass protests in Iran that have persisted for about two months in different cities in Iran, as well as far from Iran’s borders. Mahsa was detained, beaten, and killed by Iran’s morality police for what they deemed an inappropriate dress style. Since then, thousands of Iranian women and Iranian people have continued protesting the compulsory veiling law and other humiliating laws in Iran.

Beyond the very progressive name of this movement which is “women-life-freedom”, this can be called a movement of symbols. Indeed, different symbols dialogue with each other in the streets in Tehran, Zahedan, Shiraz, Isfahan, and even in Berlin, Helsinki, and many other places across Europe. The dialogue of symbols in this movement is based on the veil issue, which can be symbolized by the colonial stereotypical image of the hijab as a symbol of Muslim women’s suppression (Mizel 2019, 211). However, this movement has been using the veil, not as a symbol of suppression but instead as a symbol of resistance. And the “veil” has become a peaceful weapon to make changes. Indeed, veiled women alongside many others have joined the movement and asked for freedom, freedom of lifestyle, and freedom of choice for all people. Mahsa’s death resonated with the very typical rights of Iranians. This movement gives visibility to the features of women’s life in Iran that have been usually silenced. Women’s visible bodies in the streets open the possibility of a new kind of resistance and dialogue with the patriarchal spatial settings in the streets, places where women have always been invisible and veiled.

To further explain the dialogue of symbols, a reference to the revolutionary song of this movement would be useful.  A few days after the launch of the women-life-freedom movement, people in Iran and in the Iranian diaspora started whispering the song of Shervin Hajipour, an Iranian singer and songwriter. He wrote the song based on the tweets of Iranian people in response to the question of ‘Why do they ask for change?’ and ‘why do they protest?’. These tweets start with the word “For” (Baraye).  Shervin published the song in September 2022 on his personal Instagram page, and it became known as the Iranian 2022 revolutionary movement anthem. This song reached 40 million views in two days after it was posted on Instagram (Mellor 2022).

“For dancing in the street

for my sister, your sister, our sister

for longing for a normal life,

for the corrupted economy,

for yearning to live life normally”

for a girl who wished she was a boy for the smiling face for woman, life, freedom[1]…

As it might be clear in the song lyrics, Shervin refers to very basic rights that have been stolen from the everyday life of Iranians. This song is whispered by many Iranians in the diaspora to show their solidarity with protestors in Iran, however diasporic solidarity with the woman-life-freedom movement has been linked to different dynamics. The fragmentation in the Iranian diaspora (Khosravi 2018) complicates its analysis. For instance, one of the Iranian women who has been living in Germany since the Islamic revolution, and who calls herself an exiled Iranian woman, refers to those complexities with regards to one of the biggest protest strikes in solidarity with the Iranian people, which happened on the 22nd of October in Berlin. According to the media, about 80,000 to 100,000 people joined the demonstration to show their solidarity with protestors inside Iran (Malekian 2022).  Elnaz belongs to leftist parties and sent me the flyer about their contribution to the demonstration in Berlin a few days before it happened. In the flyer, it is said that: “the streets belong to all people. No need to meld our differences in the name of becoming one. As a feminist anti-racist leftists’ group, we participate in this demonstration as an independent bloc and invite all who favor our cause to join us”. A few days after the Berlin demonstration, I called Elnaz. She conveyed her observations and feelings about the current situation in the following statement:

“Can you believe that these young protestors in Iran, who do not even know our stories, came to the streets to defend our rights?” (Skype interview on the first of November 2022).

However, in explaining what happened during the Berlin protest, her tone changed dramatically. Although Elnaz was very positive regarding the collective action that happened in Berlin, she argued critically that:

“In Berlin, nobody referred to Iranian women’s rights in the demonstrations. Even women who got the tribune referred to their own stories and asked for justice regarding those. But they haven’t referred to women’s rights violations in Iran which have been the main aim of this movement” (Skype interview on the first of November 2022).

She was suspicious that diaspora activists were arguing for their organizational aims and objectives, which do not concern women’s rights. Another activist who is based in Sweden and who participated in the Berlin demonstrations explained how each opposition group tried to show its flag and chant its organizational slogan in Berlin. She shared her observations with me and said:

“I felt the footprints of patriarchy in the name of nationalism in Berlin. I could not believe that the progressive slogan of Women -Life- Freedom was changed to the patriarchal slogan of ‘Man-Homeland- Prosperity’ as an excuse to support the monarchy and the Pahlavi king’s family” (skype Interview 7th of November 2022).

These kinds of arguments reflect the communal divisions existing among the Iranian community, as well as the flag debate that is a symbolic representation of Iranian group dynamics. Different versions of the Iranian flags and slogans symbolize and reflect diverse religious, gender, ethnic, and political hierarchies that exist in the Iranian diaspora community. Those hierarchies lead to fragmentation, differentiation, and segregation at different levels (See Khayambashi 2019). However, the complexity of the Iranian diaspora goes beyond symbols related to flags and slogans. Whilst one group of Iran’s government opposition in the diaspora asks the international community to put more sanctions on Iran, other groups insist that there is no “woman, life, and freedom” with sanctions (Shakhsari 2022). These opposite arguments have created a toxic fog of suppositions, insinuations, rumors, and hearsay, which continue to dominate in the diaspora community, as they accuse each other of supporting an autocratic theocracy and dictators.

However, the social media content – as the main source of information on Iran’s current protests – shows that these segmentations regarding the flag, etc. are not critical issues in Iran at this stage. As Féron (2017, 374) explains, language and ideas regarding the conflict in countries of origin might dramatically change and transform in the diaspora settings. However, it does not mean that diaspora communities are not conscious of the conflict in the country of origin. While analyzing conflict autonomization and reinvention process of conflict in diaspora settings, diaspora subjectivity as well as their experiences related to homeland issues should be analyzed through the historical longue durée. These analyses need to be built on a close examination, as well as on an un-homogenization of the Iranian diaspora. Various religious, ethnic, political, and social differences have influenced the Iranian diaspora’s attitudes and it is not possible to analyze it as a homogenized community. The politics of the locations that they reside in, and the time and reasons for leaving Iran are other important factors in this analysis.

Despite these experiences pointing to the segmentation of the Iranian diaspora, some Iranians demonstrate a willingness to look for unity and to save the women-life-freedom movement from being highjacked by patriarchy and political powers. Sara is a 32-year-old Iranian student in Finland. She shares her experience of being in the Iranian gathering in solidarity with Iranian protestors in Tampere-Finland. Sara expresses her deepest feelings about the capacity of uniting Iranians despite all their differences:

“I hesitated to continue; I was thinking about how I can hold her hands. I started to look at our hands. she was asking me to hold her hands. It took me some seconds…but finally I touched her hand and warmed up. Tears of joy and of sadness shed on my face.  Her voice was the loudest in the crowd. “Woman- life-freedom”. I joined them vocally and started chanting. We were chanting together. For one goal. For an ideal utopia which became more accessible whilst we held our hands, even thousands of kilometers far from our country” (Interview on 15th of October 2022 in Tampere).

Malekian, S. (2022). Tens of thousands march in Berlin in solidarity with the Iran protests. (online). Available at: https://abcnews.go.com/International/tens-thousands-march-berlin-solidarity-iran-protests/story?id=91926288 [Accessed 10 November 2022].

Mellor, S. (2022). Musician’s song about young Iranians’ desire for ‘a normal life’ racked up 40 million views on his Instagram. It also earned him a week in prison. (online). Available at: https://fortune.com/2022/10/10/musician-shervin-hajipour-song-about-young-iranians-desire-for-normal-life-40-million-views-instagram-week-prison/ [Accessed 10 November 2022].

Shakhsari, S. (2022). Without Ending Deadly Sanctions on Iran, There Can Be No “Woman, Life, Freedom”. (online). Available at: https://truthout.org/articles/without-ending-deadly-sanctions-on-iran-there-can-be-no-woman-life-freedom/ [Accessed 10 November 2022].