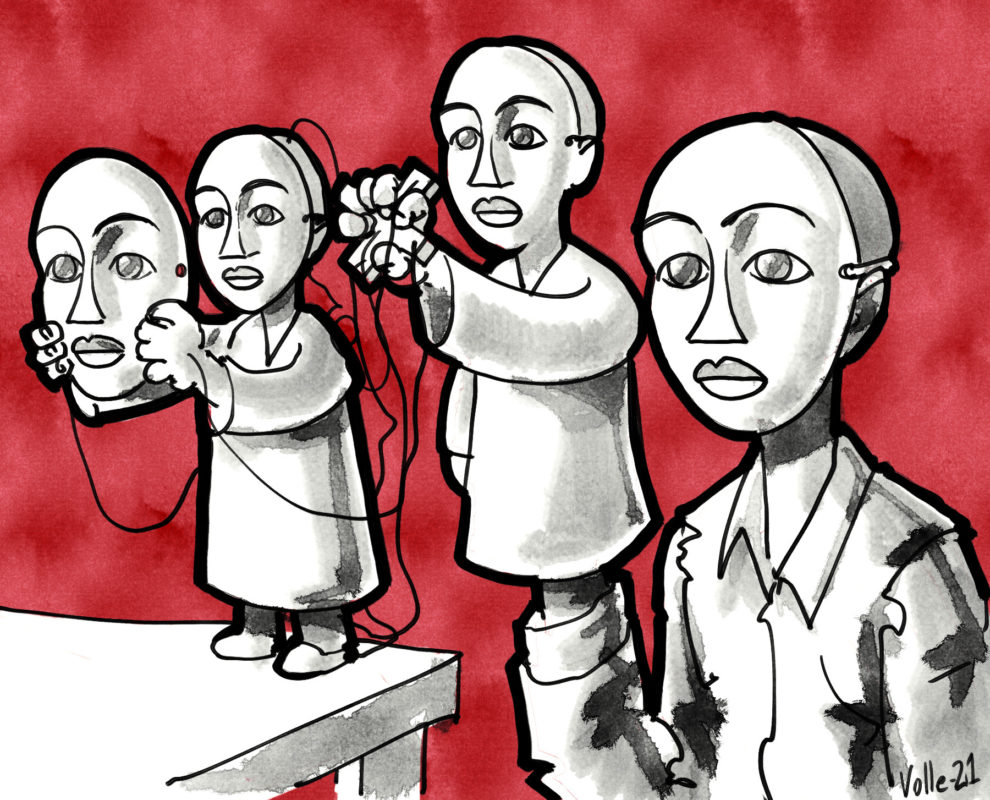 Because the word diaspora originally designates the dispersion of peoples from their homeland, we commonly think diasporic identities in the light of a triple context: their country of settlement, their country of origin, and the transnational space in-between. This becomes even more evident when it comes to reflect on the nexus between diasporas and conflicts. The notion of conflict importation, in particular, emphasizes how the presence of populations originating from war torn areas – or sharing alleged resemblances with specific conflict zones, be it cultural, religious, or ethnic – can lead to the displacement of these battlefronts in the host societies. Although such risks exist, often due to the deployment of transnational networks of mobilization, we should be careful not to lock diasporic populations in confined identities by assuming naturalized bonds between them and their supposed homeland. In the scholarship on diaspora, this danger of essentialization has been aggravated by what Nina Glick Schiller has called the “ethnic association fetish”[1]. By focusing on organized groups, typically with strong political agenda, studies tend to overemphasize the connections that indeed exist between parts of the diasporas and distant conflicts. To avoid reducing diasporic experiences to mechanical identification with and mobilization for homeland politics or conflicts, it is important not to limit our attention to organized collectives and restitute the diversity of diasporic lived realities.

In that perspective, zooming in people’s family and personal trajectories offers an opportunity to critically reexamine the complexity of diasporic identities and, by extension, the possible dynamics shaping their relations to given conflicts. During my fieldwork among Middle Eastern diasporas in Canada, it rapidly became apparent that the general dichotomy between “home” and “host” was misleading. It tends to infer an always-identical movement, often along a North–South divide, wrongfully presented as a unidirectional displacement toward peace and/or opportunities. Dominated by the image of economic success, this trope implies that migration ultimately equates to a teleological drive toward development and security, disregarding the agency of the people on the move. In fact, microanalysis unsurprisingly establishes that migration trajectories do not track along such a simplistic path, but rather follow manifold circuits with a succession of stages and back-and-forth movements. Reconstituting these itineraries allows to grasp the complexity people’s experiences of displacement and trajectories of identification.

Example 1: Back and forth across the Atlantic 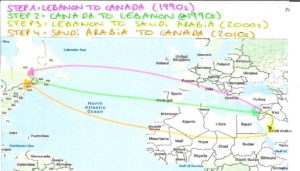 Born in Canada in the mid-1990s, Mona[2] followed her family back to Lebanon before moving to Saudi Arabia. After she completed high school, she returned to Canada with her mother and siblings. Her father stayed behind as his professional position in Saudi Arabia was considered too much of an asset for the family to abandon. Although she strongly identified as Lebanese and actively took part in the Lebanese student association of her university in Montreal, she nonetheless had strong connections with Saudi Arabia. She also noticed how much the diasporic life distorts so-called cultural identities. In particular, while the Lebanese commonly emphasize the strength of their family bonds as a point of differentiation with other Canadians, she critically reflected on the reality of this assumption. Indeed, in her own life, the distance between her father and the rest of the family generated a sense of disconnection and a growing concern of alienation.

Example 2: A “diaspora” within the diaspora 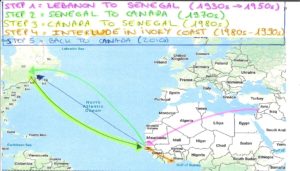 Sylvia was born and raised in Senegal. Her father’s and mother’s families left Lebanon for West Africa in the 1930s and 1950s respectively. After getting married, they moved to Canada for their studies. They later returned to Senegal where they pursued their professional careers. When Sylvia reached university, the entire family settled back to Canada. Once in Montreal, Sylvia tried to connect with fellow Lebanese students, but often failed to feel part of their group, mostly because she never visited Lebanon, nor spoke Arabic. It was only with Lebanese originating from the West African diasporas that she was able to find common grounds. She expressed a complicated relation to her Lebanese identity and her difficulties to understand the divisions that resulted from the history of Lebanon, explaining that for her the intergroup conflicts were unnoticeable in Senegal.

Example 3: Mobility and memory of a distant path 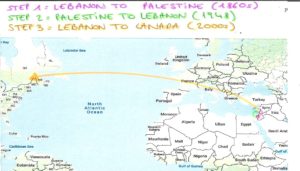 Fouad spent all his childhood and youth in Lebanon, before moving to Canada to complete a doctoral degree in Montreal. However, he nonetheless referred to a complex family itinerary. While his father was originating from Palestine, where he was born before being expelled to Lebanon in 1948, his ancestors actually travelled the other way around, leaving Mount Lebanon to establish themselves near Haifa. Fouad often insisted on this past – as well as on the fact that his parents belonged to different religious groups – to underline his ability to adapt to different surroundings. As he himself became a father in Canada, he stressed that he was careful not to confine his son to a single identity, language, or cultural heritage.

These examples of complex itineraries immediately highlight the multiplicity of the resources available for people. Individuals and families took decisions to make the most of the situations in which they were thrown. They also used these diverse experiences to make sense of their life trajectories and construct their sense of belonging, playing with manifold contours and degrees of possible identifications. Exercising their agency, people identified and refused to identify more or less strongly with particular categories of belonging allocated (or simply available) to them in everyday situations, opening up an array of “competing regimes of difference”[3] that they could use to position themselves in interactions. For many among my interlocutors, their awareness of these possibilities even incited them to revendicate alternative identifications disconnected from any personal or family national, ethnic, religious, or cultural background. As Sylvia once put it to me:

“Khalil Gibran wrote in one of his books: ‘you are rich of all cultures’. (…) I grew up in Senegal, then I arrived in Montreal, and I’m originally Lebanese…this is in my blood, I cannot change it. (…) I also studied in a French school and I learned other languages like Spanish. (…) When I came to Canada, I realized that I could easily go to Cuba. So, I went and I immersed myself into the Cuban culture. Because I have a passion for dance (…) and I love Latina dances. (…) I would love to do an internship that would allow me to visit South America, but through danse. (…) It’s amazing, when you danse, you immersed yourself into cultures. (…) Yes, I’m Lebanese but as I often told my parents, if I were born in another culture, it would be the culture of Latin America…Spanish or Brazilian…that’s also my universe.”[4]

The way people played with these complex identifications could of course be interpreted differently. Sometimes, it appeared that they were trying to adopt what Ranita Ray coins “identities of distance”[5], that is, definitions of identities that evade the stereotypes associated with their marginalized and racialized condition. This could help to present a non-threatening image of themselves, distanced from the dominant images associating Lebanon with conflict and more generally Arabs with radical Islam. However, their aim might also be to simply escape identity assignations imposed on them by the majority population and multicultural institutions, and, in doing so, reaffirm their sense of self and local attachment. In many ways, their efforts reminded me of the elusive move between being acted upon and taking action at the heart of Michael Jackson’s existential anthropology[6].

For us in the DIASCON project, the reality of diasporas’ complex itineraries serves as a powerful reminder. It calls for a careful reexamination of the existing understandings of diasporic identities to better take into account how people shift between multiple (and often interconnected) possible identifications in their daily lives. Fundamentally, this urges to move away from culturally and spatially essentialist concepts that presuppose natural connections between territories, cultures, and belonging. It is especially true when it comes to study the relations between diasporic populations and conflicts. In that perspective, the notion of conflict importation proves particularly problematic as it ultimately assumes a mechanical transposition of conflicting identities between contexts. Instead, we intend to focalize on the eminently political events, actors, and contingencies that shape the nexus between diasporas and conflicts.

[2] All names are pseudonyms to protect people’s anonymity.