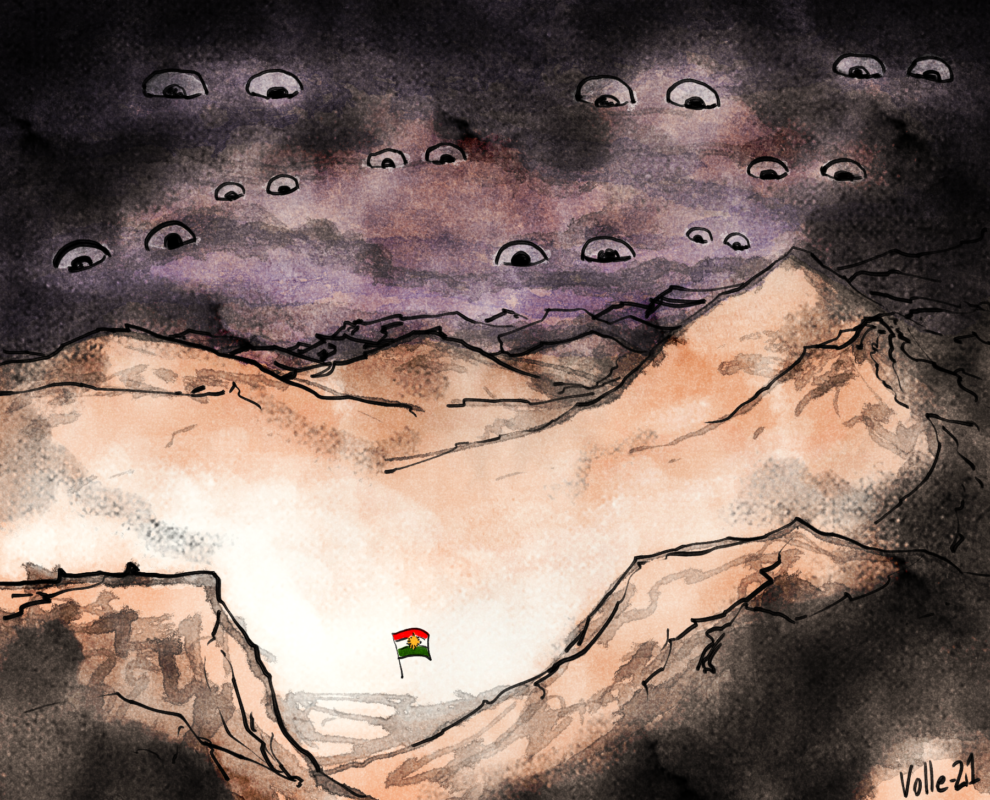 ‘The Kurds are no longer the forgotten people. The world has opened its eyes to the Kurdish nation and undermined the saying ‘no friends but the mountains’’.

The above quote is from an online Facebook post from 2019, in which a Kurdish diaspora organization in Denmark voiced its appreciation of the support for the Kurdish struggle it had received from another Danish organization. With a history of marginalization and oppression, the Kurdish people, in particular those in Turkey, have been fighting a decades long fight for independence and rights in ‘Kurdistan’, a geographical area that spans Turkey, Iraq, Syria and Iran (Candar 2013). What the quote suggests, is that in the context of Denmark at least, something is happening discursively that change the conventional conflict dynamics and invokes a sense of (seemingly unprecedented) support for the Kurdish struggles. These dynamics are at the center of my research on Kurdish and Turkish diasporas in Denmark, in which I look at online mobilization patterns to investigate how the Kurdish/Turkish conflict is reflected in online mobilization of the diasporas.

Despite their large communities and decades-long migration history, little academic attention has been given to the Kurdish and Turkish diasporas in Denmark (Schøtt 2019), making a study of how they mobilize and potentially transport conflict in the Danish context of great interest. Kurdish and Turkish immigrants and descendants constitute the two largest groups of ethnic minorities in Danish society (Danmarks Statistik 2020; Serinci 2011). Despite occasional clashes between Kurds and Turks (Birk 2019), levels of direct, physical violence seem relatively low compared to for instance Germany (Baser 2017), but communities remain quite mobilized, nonetheless. The visible presence of opposing communities for instance via demonstrations or physical clashes therefore makes for an interesting study for comparative purposes (Emanuelsson et al. 2015). In my research, I tracked four diaspora organizations that are visible and active on Facebook and geographically located in Copenhagen. Online mobilization of diasporas in the context of conflict transportation is similarly rarely investigated and when it is, it is often essentialized as long-distance nationalism and seen as both removed from offline settings or as a space for radical expressions of conflict (cf. Turner 2008; Martin 2019). The choice of using online sources of data collection and digital ethnography, was therefore also an attempt to fill this gap and look at the potential of online data collection for the study of diasporas and conflict.

In Denmark, the online mobilization of Kurdish and Turkish diasporas can be seen as a reflection of conflict, with visible processes of conflict transportation taking place in on- and offline spaces. While symbols, images, group boundaries and discourses are transported and used both in online spaces as well as offline demonstrations and gatherings, mobilization patterns also suggest a much more complicated picture than a simple transportation of conflict. Rather than mobilization being the result and reproduction of the Turkish/Kurdish conflict, it is intertwined with issues such as Muslim rights, women’s rights, other conflicts, equality and Danish welfare state values. The conflict is further reframed in the context of Europe by tying the security of Europe to the security of the Kurdish population in ‘Kurdistan’, the former depending on the latter. This reconstruction of conflict narratives reflects a process of autonomization (Féron 2017), in which conflict can involve different actors and flexible or changing objectives and stakes as it is reenacted in a completely different context.

Additionally, I found that the Danish context influences the repertoires of action used by organizations who navigate in different discursive opportunity structures (Koopmans 2004) than in the countries of origin. While support for the Kurdish struggles is prevalent in Denmark (as the quote also suggests), support for the Turkish government in public discourses is almost non-existent. This affects mobilization in a way that seems to proliferate the involvement of outside actors. In Denmark, ethnic Danes in particular have embraced the support for the Kurdish struggles to an extent where they not only mobilize in collaboration with diaspora organizations, but also mobilize autonomously of them, for instance through demonstrations or even by founding their own support organizations. As such conflict transportation in Denmark is highly influenced by actors that have no prior connection to the conflict, and it influences dynamics in a way that, as the above comment suggests, can even reverse traditional perceptions of Kurdish solidarities.

Long-distance nationalism fails to explain the full extent of these mobilization which can be better understood in the context of conflict autonomization. This concept sheds light on more complex dynamics of transported conflicts and helps to understand them as deeply intertwined with both the Danish context and transnational events and actors. Autonomization additionally leaves room for investigating the mitigating effects of conflict transportation, namely how autonomization processes can create or be conducive to varying degrees of ‘peaceful’ co-existence, for instance through practices of avoidance or deflection in the host country context.

My research further suggest that rather than looking at online mobilization as something that is removed from the on-the-ground processes and offline actions, digital spaces allow us to look at both online and offline patterns of mobilization as they are intertwined and influence one another. As has been argued in previous blogposts on DIASCON, the use of digital ethnography, or simply looking at online data when investigating diasporas, should therefore not be seen as inferior to conventional ethnography or offline sources of data. Lastly, online mobilization should not be seen as solely a space of long-distance nationalism and radical behavior. Rather, digital ethnography can be useful as a tool to understand some processes of mobilization that are highly connected to offline mobilization and influenced by host as well as home country settings and other transnational actors.