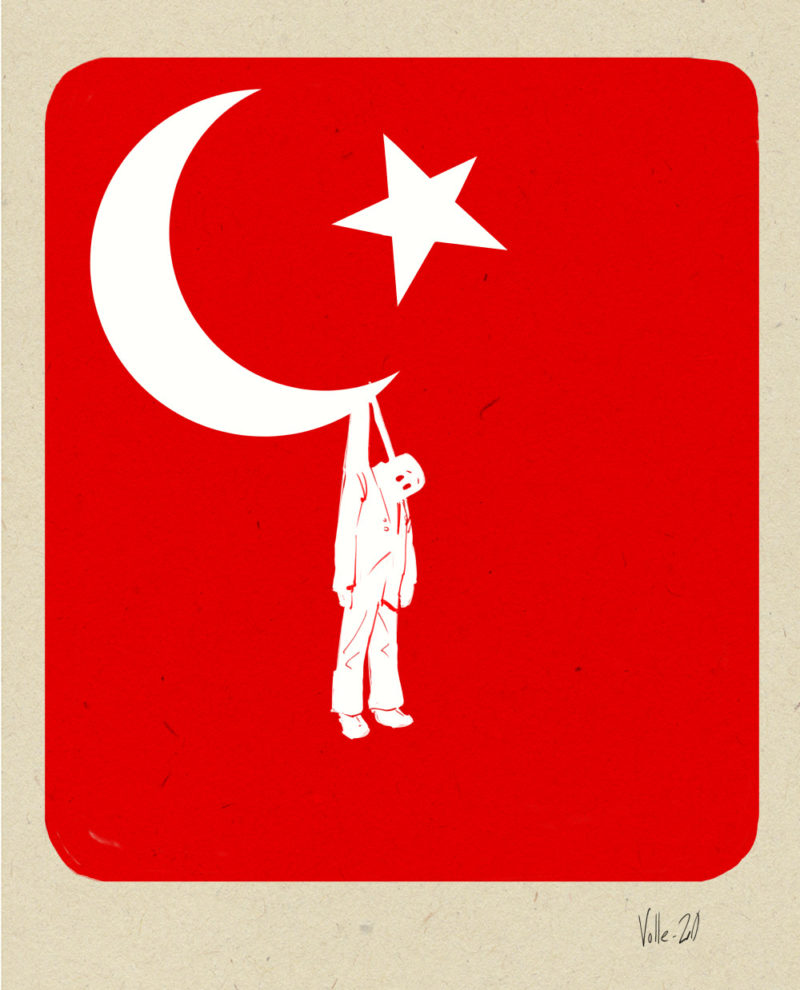 In late June 2020, episodes of violent clashes erupted between members of Turkey’s diaspora in the neighborhood of Favoriten in Vienna, Austria. The clashes between Kurdish and Turkish ultranationalist groups lasted for four consecutive days after leftist groups including Austria’s Antifa and several Kurdish and leftist groups had organized a demonstration against fascism.[i] While tensions between Turkey and European states that arose during Turkey’s recent elections are not forgotten, spill-over of Turkey’s domestic conflicts to Europe continues to damage the country’s invested interests in diaspora diplomacy and soft power. While the Austrian and Turkish government summoned their respective ambassadors, and blamed each other for the violence, the incident only highlights the tip of the iceberg in the growing intra-diasporic polarization within Turkey’s communities in Europe, and perpetuates ongoing skepticism towards Turkey’s new state-led engagement with its diaspora in Europe. Although many states around the world now engage their diasporas, Turkey’s investment in reclaiming its diaspora in the last two decades has been perceived by European policy-makers as Erdogan’s attempt to consolidate his power through strengthening Turkish nationalism on European soil.

With the foundation of various new institutions which aim to re-strengthen ties with the Turkish community abroad and tap their social, political and economic resources Turkey continues to enhance its influence in Europe. A significant portion of its policies have been dedicated to diaspora youth with the hope that future generations in the diaspora could help Turkey to create a more positive image by bridging differences between generations and countries in the transnational sphere. In this context, Turkey’s diaspora actors, for instance, recently made news across Europe for their unprecedented response in the fight against COVD-19 within their communities across host country contexts.[ii] A pivotal but unusual actor, in both negative and positive contexts was diaspora youth. While some youth actors violently clashed with members of their own community in Vienna,[iii] others provided masks, distributed food or offered additional services to the most vulnerable parts of society.[iv] How can we make sense of such ambiguous forms that Turkey’s immigrant youth take on the diaspora? Can positive actions by diaspora youth ameliorate security concerns among European policy makers and public opinion?

In Europe, diaspora youth from Turkey has traditionally been approached by their respective host countries through a racialized and securitized perspective depicting immigrant youth as unassimilable despite living in various host country contexts in the third and fourth generation. With the impact of 9/11, followed by rising Islamophobia as well as the rise of an authoritarian regime in Turkey, these trends have only deepened. The historical roots of securitized approaches towards diaspora youth, however, go far back into the 1980s. Already in the 1980s when the Turkish-Kurdish conflict erupted in Turkey, radical groups clashed in violent street fights across different European host country contexts. Most prominently in Germany, ultranationalist Turkish groups often hijacked pro-Kurdish demonstrations, while Kurdish ultranationalists attacked Turkish shops and diplomatic representations abroad. In this context, it was predominantly young actors who engaged in contentious politics, often triggering debates on their ability to integrate into their respective host countries accompanied by sharp surveillance and security measures. In the old debates, it was the diasporas themselves that were accused of importing conflicts from their home countries. In current debates, however, we observe that  it is the Turkish state and its ruling elite that are blamed for exporting conflicts to Europe. How did this discursive change come into play? We argue that Turkey’s diaspora engagement policy, with its institutions and versatile actors are the main reason for this perception change. We further stipulate that even positive engagement by the Turkish state in youth’s transnational space are shadowed by the ideological burden of the diaspora engagement policy and the current Turkish regime’s political agenda in and outside Turkey.

Although intra-diasporic conflict between diaspora youth is not a new phenomenon, there is  a new component that requires imminent attention by both academics and policy-makers alike. While Turkey adopted a rather reactive and passive stance towards citizens abroad over the last decades, in the 2000s the AKP has been highly proactive in reaching out to its diaspora – most prominently through electoral mobilization. A recent claim, however, targets future generations in the diaspora, namely young diasporans abroad. President Erdogan’s growing interest in shaping a pious generation of young citizens in Turkey as well as the regime’s concerns of brain drain into the West, have resulted in a growing interest to engage the youth both at home and abroad. In this context, youth actors in Turkey’s diasporas around the world are being increasingly mobilized through state-led initiatives spearheaded by Turkey’s Presidency For Turks Abroad and Related Communities (YTB). A review of Turkey’s diaspora policies reveals not only that the Turkish government has steadily expanded its outreach towards young diasporans since 2013, but that initiatives launched target a specific kind of audience susceptible to regime-loyal propaganda. In order to form a regime-loyal generation of young diasporans to come, Turkey has launched various programs that reveal its intentions to mobilize Muslim youth in favor of Turkey by putting emphasis on Islamophobia and exclusionary discourses in European host country contexts. In this context, initiatives such as homeland tours, stipends, international conferences and educational fairs are used to brand Turkey as an economically strong nation leading the Muslim world counting on its global diaspora youth to carry its message into the foreign policy sphere.

Most recently, youth actors have also become prominent in the context of Turkey’s transnational efforts to foster closer ties with diasporans, and present itself strong developmental actor during the COVID-19 pandemic. Amongst Turkey’s transnational responses to the pandemic such as the repatriation of citizens abroad and the establishment of various new and at times digitalized services to diasporans,[v] Turkey also actively incentivized the involvement of young citizens abroad in the fight against the pandemic. With the establishment of a COVID-19 response fund initiated by the YTB on April 3rd, 2020, for instance, Turkey asked diaspora actors to get actively involved in activities to prevent the spread of the pandemic within their diaspora communities, and called for projects from within the diaspora to support diasporans during the pandemic.[vi] In this context, youth actors across Europe became frequently involved in various pandemic related campaigns such as producing and distributing masks and health equipment to diasporans, while also reaching out to the most vulnerable parts of the diaspora by taking on grocery shopping responsibilities.[vii] Moreover, Turkey’s YTB also incentivized young diasporans involvement throughout the ongoing COVID-19 pandemic by using existing digitalized spaces such as Facebook, Instagram, YouTube and Twitter, while also introducing new digitized formats such as digital concerts ‘Dijital Konserler’ by famous diaspora artists and young talents[viii] or by offering Turkish language education ‘Türkçe Saati Dersleri’ to engage the youth throughout the pandemic.[ix] In addition, YTB established a children’s program ‘YTB Çocuk’ offering series of Turkish language fairytales for Turkish speaking children covering fairytales from Turkey to Central Asia.[x] While the main purpose of Turkey’s new digitalized outreach was to ensure continued presence in and access to the diaspora, the majority of initiatives clearly targeted Turkey’s ongoing identity building efforts towards young members in the diaspora through the newly emerging digitalized sphere. By investing in such initiatives, the state authorities make sure to strengthen ties between the diaspora and the homeland, spread domestic propaganda abroad and work towards creating loyal communities outside its borders. These efforts do not go unnoticed by European policy makers who perceive Turkish diaspora youth as a tool under the pawns of the Turkish regime and as a threat to these young people‘s loyalties towards the country that they currently reside.

Turkey’s new transnational strategy towards young diasporans could be perceived as a benevolent attempt to empower marginalized immigrant youth in Europe. Taken as a whole, however, the content and target of its new youth engagement reflects an ambiguous form of engagement. On the one hand, Turkey’s attempts to generate gains from future generations during crucial domestic elections serves the purpose of legitimizing the competitive authoritarian regime. In addition, diaspora youth are used as brand ambassadors who may successfully lobby host country governments and further Erdogan’s foreign policy gains in Europe. On the other hand, however, by constructing a homogenous type of pious and regime-loyal diaspora youth, the regime seeks to generate future generations which will operate as guardians of the Turkish regime abroad. Thus, regime-loyal youth become multipliers of regime propaganda and repression who are ready to partake in violent clashes on behalf of the regime abroad.

By engaging in such ambiguous forms of engagement, Turkey’s policies not only impede with the integration policies of host countries, but also deepen skepticism and prejudice among European policy-makers. Moreover, as Turkey’s new diaspora engagement towards pious and nationalist youth continues, youth actors that oppose the authoritarian regime such as Leftist, Kurdish or Alevite diaspora youth who are often excluded and at times repressed by Turkish state actors, continue to join forces against the regime. Ultimately, Turkey’s recent attempts to use diaspora youth for the benefit appear to backfire, and generate outcomes that do not really go hand in hand with the objectives of creating a soft power tool.

Østergaard‐Nielsen, E. K. (2001). Transnational political practices and the receiving state: Turks and Kurds in Germany and the Netherlands. Global Networks, 1(3), 261-282.